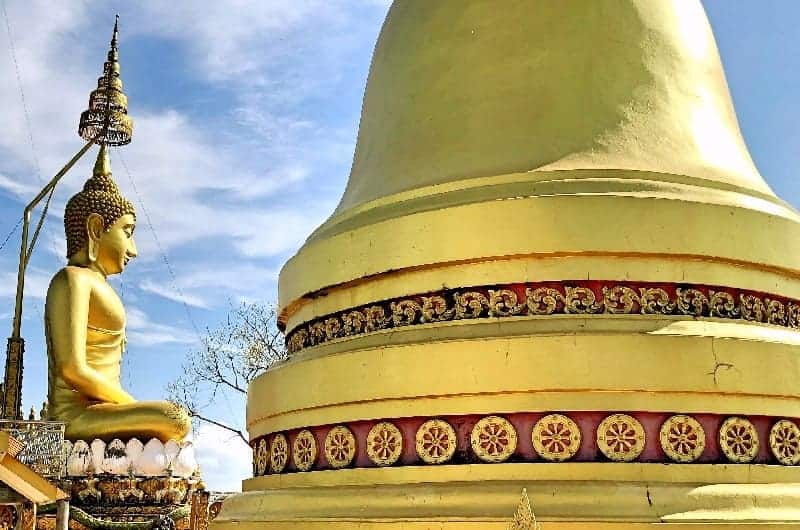 The Tiger Cave Temple in Krabi

1237 strenuous steps later, I understood it was worth the effort.

Text and Photo by Maya

One of the most revered Buddhist temples in Krabi is the Wat Tham Suea, also known as the Tiger Cave Temple. Its name comes from a legend according to which a tiger used to sleep in a cave at this location and its roaring could be heard all around the place. Later, some monks and nuns began to come to these caves to practice Buddhism, and the tiger retreated to live up in the nearby mountain.

I don’t expect to find or hear any tiger when I set out from my place and get a taxi to the Tiger cave. From Klong Meuang, the peaceful, secluded beach where I’m based, it takes about 30 minutes to get to the temple. At the top of the hill, if you are a believer, there’s a “footprint of Buddha”, but even if you aren’t you’ll be rewarded with a 360 degree sensational view of the province. On a clear day you’ll see the stretch of beach of Ao Nang and the surroundings, the mouth of the river in Krabi Town, and the countryside bordering the city. But, first, there are 1237 steps to tackle, and it’s no joke: they are steep, of different heights, slippery in rainy weather, and a challenge made harder by the heath.

I go early in the morning, half an hour after sunrise, and when I start my climb there are a few people coming down and a few going up with me. Later on, on my way back, the crowds will be much bigger. As I finally make it to the top, about 30 minutes after starting, I gulp the remaining of my water, catch my breath, wipe off the sweat from my face and gloat a little for the mission accomplished. Old people and kids make it to the top, so, don’t get me wrong, this climb can be done by almost everybody, but still remember that it won’t be easy for the faint hearted or those scared by heights. 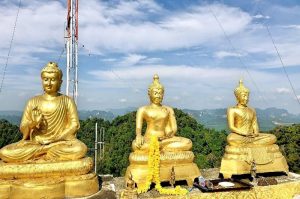 On my descent, besides birds and sleepy stray dogs, I meet the notorious noisy, crazy monkeys that live in the forest surrounding the temple. There weren’t any while I was ascending, however with more people coming up and bringing bananas and nuts to feed them, they gather in great number and start getting excited: they jump from the trees along the stairs, slide down the handrails, tackle people’s bags and backpacks to steal anything which is not secured, and fight for the food. Even if you’re not afraid of monkeys, keep in mind that their bite can transmit rabies, and that these monkeys get out of control when there’s food involved. Just refrain from feeding them, and secure your bag carefully.

One downstairs, safe from the monkeys, I walk near the monks’ compound (called Wonderland) where monks and nuns live in cabins, do their orange laundry and live their everyday life. The shrine to the Tiger is in a nearby cave full of coins and food and drinks offerings, and it’s anything other than curious, to be honest.

My little adventure is at the end, and I go give my tired legs a deserved rest. It’s been another inspiring day, here in Krabi.

2- Drink plenty of water. Bring your bottle which you can refill for free at the top.

3- Close your backpack and be careful of the stealing monkeys , especially in the early morning and late afternoon. I’ve seen a monkey jump on a guy’s shoulder and grab a napkins pack before he could even realise it.

4- Up for a challenge? You can try to beat the fastest climber, a guy who set the record of reaching the top in 9 minutes and 20 seconds.

Look at our tour to Tiger Cave Temple