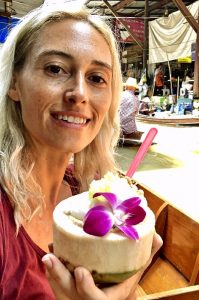 I could write a novel the size of a phone book about all the temples and pagodas I’ve visited around Thailand. So it came with great surprise when my friend Pluto told me about an unheard of temple near Krabi, and I was even more surprised after seeing a few photos of the above-mentioned temple: not a tiny, secluded pagoda but a huge Hindu-mix-Thai building adorned with real size elephants and Nagas, monkeys and hundreds of Buddhas. The Wat Bang Thong is only about 13 years old and it was built in Ao Leuk, a few kilometres from Phang Nga, thanks to donations collected mostly among the locals who wanted to worship the Buddha in their own unique style.

As you approach it from the main entrance, it resembles a Hindu temple, or even a Mayan pyramid, however Wat Bang Thong is Buddhist, and built in the Putthakaya style. Its golden pagoda, reaching at almost 70 meters high, is one of the tallest in Asia. Even more incredibly, it’s rarely visited by tourists.

I choose to go on a Saturday morning, half expecting crowds, and instead there were only Thai families, and a beautiful Muslim bride who was having her portraits taken with the vivid okra walls of the temple in the background. Thai children were playing hide and seek among the columns of the main hall, or climbing the pink elephant statues in the yard; a few old ladies were napping or chatting in quiet corners; a monk was leading the prayer in front of a small crowd, an old cat was sleeping in the sun. Among the idyllic scenery, I was the one taking pictures, marvelling at this unique architecture and at the local devotion who built such a magnificent structure.